Lula Belle is a Beneteau First 36.7 yacht based in Dun Laoghaire in Dublin. Lula Belle started life in 2005 in Howth Co. Dublin. She was called "The Baily" while there. She was bought for Offshore racing and thrives at it. I purchased her in May 2009 and changed her name to Lula Belle. I did get a bit of drift wood and with the name "The Baily" on it, I threw it off the stern and there-by any bad luck with changing her name.
I had a very kind and lovely aunt called Terry who passed away shortly before then. I have 5 sisters and when we were young Auntie Terry would visit from her travels around the world. She would tell us great stories of far away lands. In a bleak, wet, 1970`s west of Ireland we would hang on every word. When she wanted to ask one of the girls to get something, she would never remember the girls names and would call them Lula Belle.
Lula Belle represents the freedom, wanderlust, carefree, love of life and mostly living for the moment which Terry lived her life by. Lula Belle is dedicated to Terry and every time I step on board that name tells me to enjoy life no matter what. 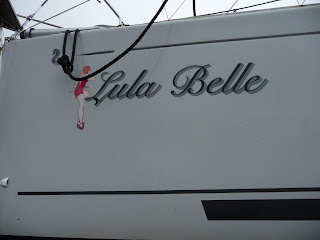 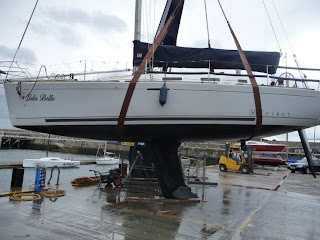 PLEASE SUPPORT US IN OUR DYNEEMA CHALLENGE BY FOLLOWING LINK BELOW
http://www.dyneemaexperience.com/profile/liamcoyne.htm#follow